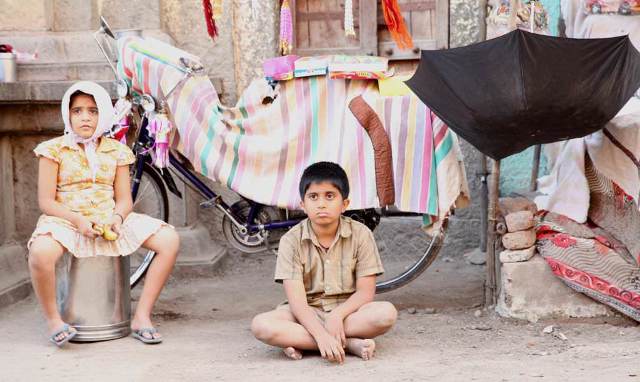 Paresh Mokashi who previously garnered lots of praise for his film Harishchandrachi Factory could not have brought up a more delectable treat for the children on this Children’s Day. Elizabeth Ekadashi is a beautiful world of children who are innocent but smart and possess a self empowering will to get though difficulties. The story is set in the holy town of Pandharpur where religion is predominant in the local life. Dnyanesh, a 9 year old boy and  his younger sister Mukta belong to a family that is financially humble but are full of good values. We don’t know if religion and God can produce miracles but will power of iron can definitely produce miracles that are beyond imagination. And how Science can make a difference specially if it is learnt at the feet of one’s loving father ? Elizabeth Ekadashi presents a beautiful story that can give you Goosebumps at times. It will bring tears in your eyes. It will make you marvel at the unpolluted world of children.

Dnaynesh, played by Srirang Mahajan, has lost his father . His very priced possession is his bicycle named Elizabeth that his father who was a scientist designed for him. Financial difficulties following father’s death causes Dnyanesh’s mother to make him sell his cycle in order to pay a lethal loan .Dnyanesh decides to earn a living by other means in order to save his Elizabeth but how ?

It is delighting to watch the child actors Srirang Mahajan as Dnyanesh and Sayali Bhandarkavthekar, playing Mukta. The brother sister duo who are beautifully in sync with their surroundings and other characters. The onus was completely on the two child actors and the credit is definitely theirs without doubt. Other actors who play the mother ( Nandita Dhuri ) and Ganya ( Pushkar Lonkar ) also excel in their respective roles.

Paresh Mokashi came up with this film after a hiatus of about three years past his award winning Harishchandrachi Factory. His direction could not have been better . Tackling such a subject where simplicity is the prerequisite, he has carried home his story wonderfully. Hats off to the writer Madhugandha Kulkarni and the production team that pulled off this rare genre of childrens’ film that is beautiful art in itself.