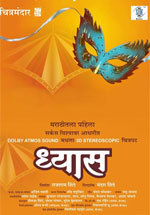 In a rare ensemble star cast, eminent personalities form Indian  music namely Sonu Nigam, Asha Bhonsle, Kunal ganjawala , Shaan and Ravindra Sathe are coming together for the Marathi film Dhyas. The film is directed by Rajaram Shinde . Its music is composed by Madhav and Achyut Thakur . The film was earlier slated to release in the second week of August in 2013. Unfortunately certain issues in distribution caused the film’s delay. Finally after the delay of more than one year, the film has seen the light of day this November. On this Chidlren’s day when Paresh Mokashi ‘s Elizabeth Ekadashi is releasing, Dhyas is stirring the music notes with a  rare star cast consisting of singers like Asha Bhonsle and Sonu Nigam whose personalities have transcended the music industry . Thanks to their presence the film has been taken noticed of by the audience and the critics and the verdict is awaited.

Recently Marathi cinema has seen more commercial entertainers. Dhyas will cater to a different audience since it is based on music. But it is definitely not esoteric. Even the lay man can understand and enjoy the intricacies of the story that is beautifully woven by director Rajaran Shinde.