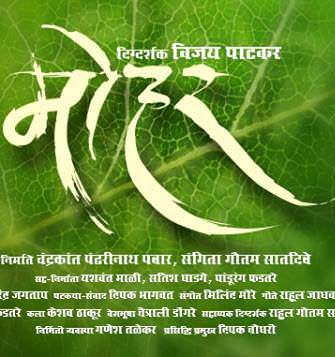 Mohar is a the upcoming product starring Sayaji Shinde, Prasad Okay, Aditi Sarangadhar and Vijay Kadam in the lead roles, while it has two child actors like Prajakta Jagtap and Chaitany Ghadage doing their debut with this film. The film is the debut venture of VG Enterprises, which is produced by Chandrakant Pandharinath Pawarand Sangita Gautam Sat div, while is directed by Vijay Patkar, and the story comes from Rekha Surendra Jagtap. The dialogues and screenplay is given by Deepak Bhagwat. The film was supposed to release last Christmas (2015), however, it was delayed for the technical reason.

This film has a story of Nivrutti Bhaledar who is based in Mumbai with his wife Taynu and children. He makes his earning by working in a local factory, however, after some amounts of time the factory is shut down and he end up meeting fatal financial conditions making his and his family life difficult. There is no chance to see his factory reopening and he has no other option to his earning. He plans to start his own grocery store using his PF money, which is again a distant dream from him since he hardly gets the same for the corrupt pitted system. The film showcases how thedreams of common man shatter when the earning of such people goes away.