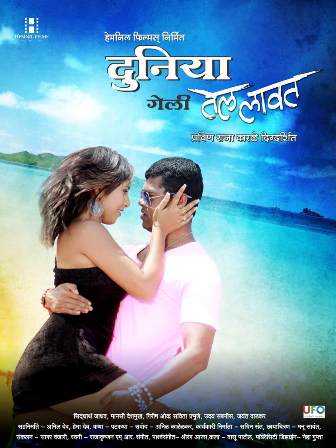 In Marathi Cinema, you can now find too many releases coming each month. One of the forthcoming movies in Marathi includes Dunya Geli Tel Laavat. As the name indicates, it’s a light weight comedy genre film releasing upcoming Republic eve of 2016. The film is also called a comedy, suspense & thriller drama movie, which has loads of action and humour as well along with the other elements. The film has Siddharth Jadhav, Mansee Deshmukh, Sammeer Sumantt and Yuugg in the leading roles, while actors like Dr. Girish Oak, Uday Sabnis, Savita Prabhune, Yogesh Shinde, Jayant Wadkar, Priya Dhande, Supriya Nalwade and Geeta Bagde are seen in the supporting roles.

The film is directed by Pravin Raja Karale, while it is produced by Pritam Anil Dev under the banner of Hemnil Films. The story is jotted down by Anil Kalekar, while the screenplay comes from Anil Kalekar, while the photography is carried out by Manu Sawant. The background music has come along with Shrirang Aras and found comes from Rajakrushnan MR. It’s a light hearted fun and frolic blended film, which is likely to get a decent collection from the Marathi speaking crowd. So, keep counting the days to catch Duniya Geli Tel Laavat next month!