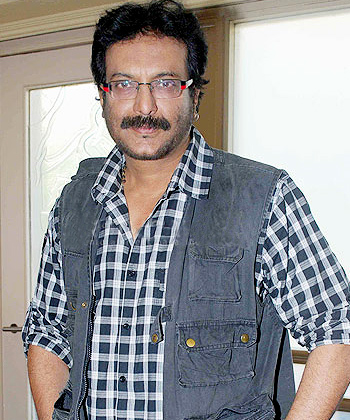 Milind Gunaji is a versatile actor in Marathi and Hindi films. In Hindi, he has been mostly associated with negative roles but in Marathi he has essayed all kind of roles. Milind started his career as a model , later in the 1990s he acted in few good films and is well known for film like Fareb, Devdas and Virasat and Zor . In all of these he has played negative roles.

Though he started his career with the film Papeeha , his first important role came in the film Fareeb wherein he played   a police officer lusting after a married woman played by Suman Ranganathan. This deceitful police officer who is obsessed with the woman, earned him a reputation of a villain and thereafter he was associated with more such roles. In the Priyadarshan directed film Virasat, he played a negative role too. In the Sabhana Azmi starrer , award winning film, Godmother, Gunaji played the role of Veeram who is compelled to earn a living through wrong means. In the Akbar Khan directed periodic drama, Taj Mahal, he played a small role of Mahabat Khan , an warrior in the court of Shah Jahan.

It is for his role in the Sanjay Leela Bansali directed film Devdas , which is most known. It is his most successful film till date in which he played the role of Parvati( Aishwarya Rai)’s shrewd son in law. When Parvati is married to the elderly Zamindar , she is a beautiful young woman upon whom, Milin’s character , Kalibabu, sets his eyes. He plays the spoil sport when Parvati invites Channdramukhi for Durga Puja by revealing that the latter is a renowned prostitute. The film was a huge hit and won many national and international awards.

Later in the comedy flick Phir Hera Pheri, he played a goon named Nanji Bhai. After the film, the actor has not played any memorable or impactful role in Hindi whereas he has been active in Marathi films and Marathi television. On the Marathi televisions he has acted in and hosted a few good serials. He most known for his travel show Bhatkanti in Marathi which was so popular that he also turned a travel writer after that for a Marathi daily. Apart from being   a very powerful actor, Milind possesses a humble nature for which he is popular in the industry . Besides, his passion for acting, he is also a great nature lover and is fond of adventure sports and travelling.