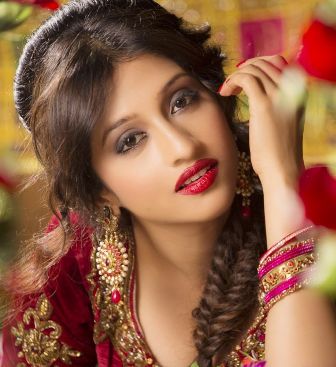 Krutika Gaikwad is an emerging name in small screen and B Town. She hails from Mumbai wherein she was born on 18th November 1994 and was raised in the city of dreams. She did her schooling from Mumbai itself, while her college came from the known one called KC College based at the western suburb station called Churchgate. She remained active in college with things like plays, fashion shows and other cultural activities. After completing she knew her way and moved ahead to make her career in the world of acting. However, before seen over the TV, she did a number of plays as had joined theatre groups. She also loved dance and hence got the training in the same.

Soon with a little bit of her struggle, she got the chance to work in a Hindi TV serial called Maayke Se Bandhi…EkDor, which was aired at the channel called Star Plus. Her performance was applauded, which gave her another set of TV Series called Maykee Se Bandi, Dor and ShubhVivah. However, soon her later TV serial (ShubhVivah) aired at TV serial turned her last venture as she took a break from the small screen to continue her love for theatres doing a number of plays for few years to soon embark with a another TV serial called Meri Bhabhi.

Soon she was seen in a Marathi film called Aashiyana, which hit the theatres in 2014, which she did with the other actors like Sai Kalyankar, Nehaa Pati and Yateen Karekar. Soon she got the chance to do a B Town film called ‘Lakhon Hain Yahan Dil wale’, which made her to cloud 9 as it made her mark her debut in Bollywood, which was released in September 2015, while it was directed by the filmmaker Munnawar Bhagat. She was seen in the supporting role with other actors like Aditya Pancholi, Kishori Shahane, Aroon Bakshi and Anju Mahendru.