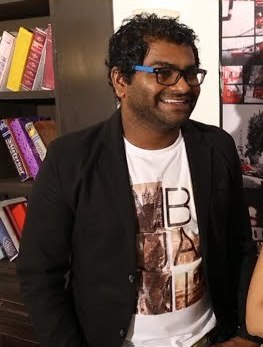 Kushal Badrike is not a known in M Town. He was born on 17th November 1980 in Kolhapur wherein she was born and brought up at. He was raised in a non-filmy background but had the knack towards cultural activities, which laid the foundation stone towards the acting world. Hence after completing his education both schooling and college, he straight away headed to Mumbai to pursue his career of acting. So, he headed towards the theatre group to do a couple of plays to make his entry easy into the M Town via the small screen. Some of his plays in Marathi include Jaago Mohan Pyare and Laali Leela. This gave him enough opportunities to enter into the final destination.

He then went on to work in a comedy serial called Fu Bai Fu, however, he was recognized with the show called Chala Hawa Yeu Dya, which is a talk show wherein he played different characters flirting with different celebrities coming to the show. Besides, the TV shows, he was also seen anchoring in a number of TV shows including the Marathi TV awards and others. He soon got the chance to do a number of movies, which started with the Marathi movie called Bioscope in 2005 and then it was no looking back for him in his filmy career. Some of the films include Friendship Dot Com, Jatra in 2006 and the same year he had Maza Navara Tuzi Bayako.

This film then followed another in 2011 called Bhaucha Dhakka and then the next year with film called Khel Mandala as Munna in the year 2012 followed by another called Eka Varchad Ek the same year followed by another Ek Hota Kau and the recent ones called Davpech. He is more popular for the TV show called ‘Chala Hawa Yeu Dya’ considering his comedy sense, which he did with the actor Nilesh Sable. In a career span of around 12-13 years, he has moved in a steady way embarking at a decent position in the M Town.