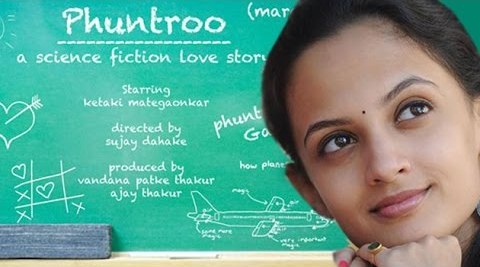 Having been a part of successful films so early in her career , Ketaki Mategaonkar believes that she is definetly on the right path. The 20 year old actress, who shot into fame through a Marathi dance reality show , believes that talent is rewarded only when you put handwork with it.

Ketaki has recently been roped in for Sujay Dahake’s next film titled Phuntroo. Ketaki had started her career with Sujay ‘s film Shala that was received with much critical appreciation and popularity. Based on the story of school going children, the film went on to win national and international awards. For this reason, Ketaki feels the film Phuntroo is going to be a special one.

The filmmakers have revealed that the Phuntroo is a love story which is based on a science fiction theme. By that we remember Priyanka Chopra and Harman Baweja starrer Love story 2050 which was also modeled on the same lines. Ketaki who has recently tasted success with the film Time Pass , directed by Ravi Jadhav , is elated too have bagged the role. Science fictions usually have a different thrill attached to them. For Ketaki the role is tremendously exciting for she will be associating with her first director Sujay Dahake and anyway can anyone not be thrilled by a science fiction ?