Nana and his tryst with tribals in Hemalkasa 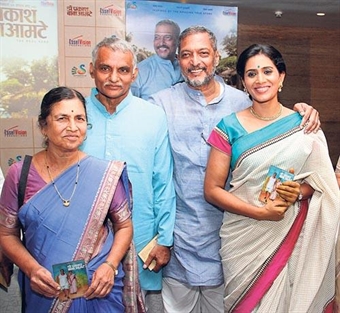 At the age of 63, Nana Patekar displays a tremendous passion to go to any length to portray a character in the best way he can. In his upcoming film, Dr. Prakash Baba Amte : The Real Hero , nana plays the role of social activist of the same name who is the son of revered social worker Baba Amte. Recently, Nana recalled his experience while shooting for the bio pic in the tribal region of Hemalkasa with the tribes. The actor shared few unique experiences he had in the midst of the tribesmen who were totally ignorant about movies and camera.

He stated that it was not at all an easy task to shoot with the people there who did not know what was going on. The cameras and the settings had to be adjusted in accordance with the tribe’s activities to get a perfect shot. To communicate with them was also very difficult. In the 60- 65 days that were spent there, the crew had to first accommodate itself to the unfamiliar weather conditions. “The place was cold and the weather was harsh for us “, he was quoted as saying.

Nana further added that his experience was wonderful with as it was the first time he interacted with such men and women who were living a completely different life from ours. Nana and Sonali , the lead actors of the film Dr. Praksh Baba Amte : The Real Hero , are promoting the film with much enthusiasm and urging everyone to watch this wonderful biopic.