Synopsis: Here comes the TV show called Karbhari Lai Bhari, which is all set to release on 2nd November 2020. The show is ready to release from Monday to Saturday on the popular Marathi Channel – Zee Marathi. The star cast include actors like Chinmay Mandlekar, Amol Kolhe, and Nikhil Chavan in the leading roles. The makers have released the promo of the TV show, which is gaining a good buzz around the media. As per reports, the show is based on the life of the political leader Raj Thackeray, however, the makers are yet to confirm about the same.

As one can check the promos of the show, it seems intriguing and has created a good buzz around the Marathi audience who are desperately waiting for the same. We already know how a film in Bollywood called Thackeray was made on the life of Bala Saheb Thackeray featuring Nawazuddin Siddiqui. The actor has excelled in his work and was able to showcase the best way. The fans seems to be excited the moment the makers were able to showcase the promo on their social media handles. The show will be aired from Monday to Saturday appearing on the time slot 7.30 pm. Stay tuned to know more about the show and others only with us. 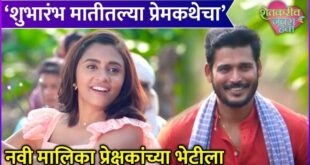