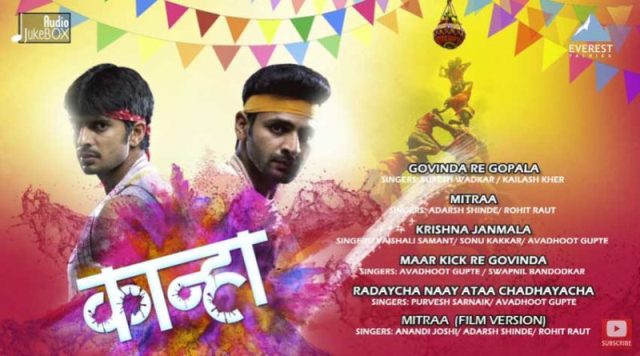 Highlighting the traditional Dahi Handi celebrations in Mumbai, Kanha mixes regional festivity with politics and brings out a high spirited drama. Starring Vaibhav Tatwadi in the main lead, Kanha is high on excitement and emotions. The story revolves around the rivalry of two groups Jai Bajrang Mandal and Jai Ekta Mandal who eye to emerge winners in the Govinda festival. Although the film moves smoothly with suspense and action, it fails to show a gripping story. A loose script and unnecessary subplots make the film appear a messy affair.

After the death of a nine year old Govinda (a boy who climbs on the top of the human pyramid), the government has put restrictions on the number of layers a group can form in the human pyramid in Dahi Handi festival. Two groups headed by Malhar, Jai Bajrang Mandal and Raghu, Jai Ekta Mandal. The later has established a record of nine layers in the previous years. Now the former looks forward to breaking it. But how? The limit has been fixed as nine. At this point begins a political turmoil which reveals how this religious celebration of Dahi Handi is actually a politically influenced event. The excitement builds up and it is left to be seen whether Malhar will accomplish his goal of breaking the record of nine layers. There is politics, friendship, team spirit blended well in this movie. With a few loop holes in the script and too many subplots moving together make it more dramatic than desired.

Kanha is like putting all eggs in one basket. The script loses focus from the main story as it meanders around political parties and religious propagandas. Also there are few illogical scenes like the Govindas falling from height and still escaping without hurt.

Vaibhav Tatwadi is the core performer. He is aptly cast and displays all the emotions meticulously. His companionship with the twelve year old boy, Kanha, (Sumedh)is outstanding. He is athletic and strong. With the release of Kanha , Vaibhav has moved one step ahead in acting.

Raghu is played by Gashmir Mahajani. Though he does not get the spotlight too much, Gashmir paints the character of Raghu beautifully with varied shades. He brings out negatives shades well especially in the Handi festival scene.

Avadhut Gupte brings out the drama and the emotions of the characters well on to the screen. Starting with the action packed sequences, he has paid great attention to the details. Barring a few loose scenes such the one in the climax, Avadhut manages to keep the story intact.

Sachin Darekar has written a good script blending the drama of politics and flavor of religion.

Avaduth  Gupte leaves no stone unturned in rendering soothing yet high spirited tunes. The music is indeed the soul of the film with an ethereal feel of the Krishna for the Janmashtmi festival. Not exactly spiritual but there is something above the ordinary in the Dahi Handi song.

Kanha is a decent watch for the weekend. If you do not apply too much logic entertainment is guaranteed.