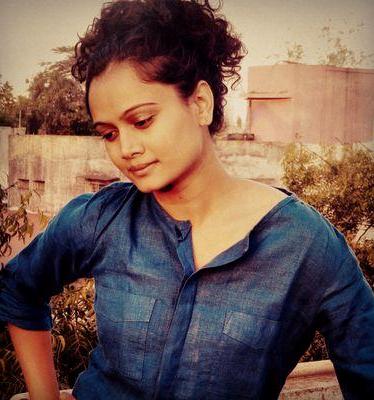 Kalyanee Mulay defines herself to be an actor, performer, traveller and explorer. She hails from Mumbai wherein she was born and brought up at. She is a 27 year old (in 2016) is a young woman who’s heart is seen in short plays and theatre. She did her schooling and college from Mumbai only apart from doing a crash course in theatres and acting from Mumbai itself. During her college days she has been the part of theatres and have performed at a number of stage during her student life. Her passion for acting theatre made her to explore this domain with veterans in this field.

Soon she was seen doing a play called unseen, which deals with a woman’s complete journey from birth to adolescence. The play was directed by Vishnupad Barve with the lead actor being Mulay itself in it seen in white color dress measuring her body showcasing quotidian rituals of womanhood – dressing up, depilation and menstruation. She performed with her play at different places including getting showcased at the National School of Drama and the recently held Colombo International Theater Festival.

Some of her other work including theatres and short film include Sunrise (2014), Vilag (2014) and On Seeing, which were made in the span of 2013-2015. Soon she got the chance to work in M Town film and she would be doing her debut with the Marathi Movie called Nude, which is directed by Chhaya Kadam and Madan Deodhar, while the film is directed by Ravi Jadhav. As far as her personal life is concerned, she is still unmarried and no one is there in her life for dating. Currently, she is focusing on her career.