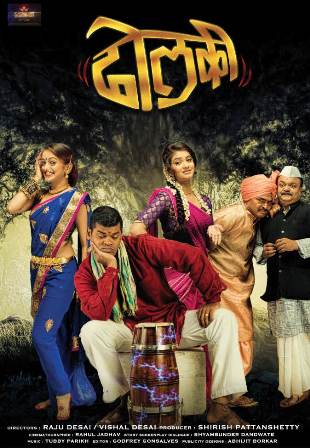 For a good comedy-drama, the film which has already created a buzz is Dholki. It is directed by Raju Desai and Vishal Desai and produced by Shirish Pattanshetty. Coming from the house of Shakti Pictures, it has already made up great expectation and people have high hopes on it. The movie casts stars like Siddarth Jadhav, Manasi Naik, Sayaji Shinde, Sanjay Kulkarni, Jyoti Chandekar, Vandana, Dr Vilas Ujawane, Kashmira Kulkarni, and Vijay Nikam. This comedy-drama has its story written by Shyam Sundar Dandwate and he has done the screenplay as well.

The plot revolves around a callous village boy who is fit for no good work but is a very amiable and jolly person. He’s very close to his mother and is looked down upon by most of the villagers. His life becomes interesting and dynamic from the day when he finds a Dholki in the village. Along with the Dholki, he meets Rakma. Here comes the love interest and both find themselves attracted to each other. Gradually with the film’s progress, the mysteries and twists take interesting turns and is sure to keep you thrilled.

The mysteries, fun are finely described in the musical tracks of the film. Tubby Parikh has composed the songs and he has done a brilliant work. Godfrey Gonsalves has done a very good job as the editor.

To find out the mysteries and twists and turns, do buy yourself a ticket for this movie. The release date has not yet been confirmed but the film is expecting a huge success.