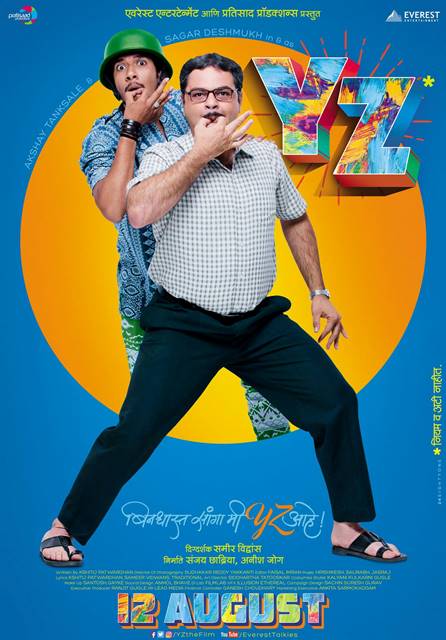 The newly released poster of the upcoming Marathi movie called YZ is as wacky as the title of the film. The film’s title has been in discussion ever since it was announced in the media especially over the social media networks. Now, with the recently released poster of the movie, the people at the social media are seen sharing and commenting on the wacky one. The film poster has the alphabets of Y and Z over them, which seemed to be splashed in the wacky colors, which simply showcases the mood of the movie.

This simply states that the people are seen taking a crazy ride and has further increased the curiosity regarding the movie. The said poster was launched at the popular temple of Mumbai called Siddhivinayak, while it is produced by the banner called Sanjay Chhabria of the Everest Entertainment in association with the group of Anish Jog called Pratisad Productions. The duo actors Sameer Vidwan and Kshitji Patwardhan are seen doing a number of films and plays together. Their last year film Double Seat has enthralled the audience, while the other film Double Seat has simply nailed the film audience a lot.

The film is all about the everyday struggle of the people, however, at the very same time, it has been splattering with a great humor in it. Hence given the people the poster and film, there is indeed loads of curiosity level found among the audience. As per the sources, the film would appeal different age groups including the youth and old. Well, time to check the poster of the film YZ as under: