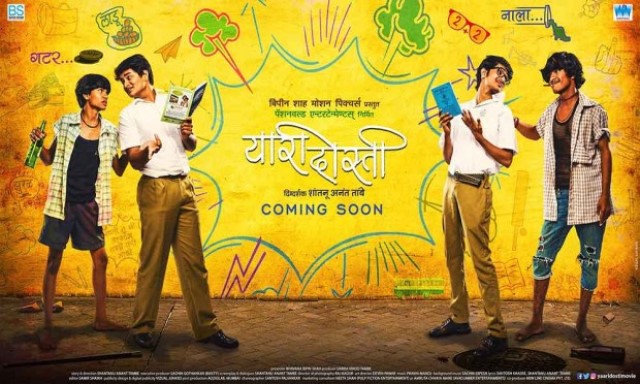 The friendship day though had no movies releasing on the subject, but the M Town took the opportunity to release the trailer of the movie called Yaari Dosti. The film has a star cast of Young and Talented actors in the cost including Hansraj Jagtap, Mitali Mayekar, Sumit Bhokse, Ashish Gade, Shreyas Raje and others in the lead role. The trailer was launched at the Sathaye College amidst the fervor and gleam of friendship day. The trailer of the film is dedicated to the true spirits of friendship and will remind each one of us the best friends, teachers, campus, teenager love and professors.

The movie simply revolves around the life of four boys and two school boys coming from affluent families and two hooligans. In the chain of incidents they are seen becoming good friends and the rest that follows is the hilarious roller coaster things, which is backed by emotional moments coming along with unexpected twists and turns that will going to change things forever in their lives.

The trailer launch program had the entire cast and crew of the film, which was presented by the popular M Town actor Sandeep Kulkarni along with Bipin Shah. The program also witnessed the launch of the movie track, amidst the packed auditorium of the college. The students were seen matching up their footsteps along with singing the track in chorus called Yaari Dosti that was sung by Praving Dhone and Avadhoot. Students got the chance to interact with the stars, while the film is releasing on 16th September 2016.