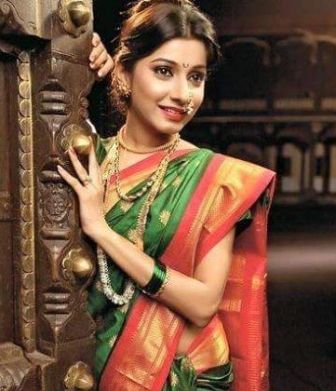 Gauri Nalawade is a known face in M Town who has worked in a number of TV serials and big screen films. The actress hails from Mumbai who was born on 11th August 1987 wherein she was brought up at.

She did her schooling from Bartiya Vidyapeeth Mumbai followed by doing her college as well from the same place. The actress has been active in cultural activities and participated in a number of plays and stage shows, which turned the base for her to enter the world of acting. So with a bit of struggle she managed to enter the world of acting making an emerging name in the M Town.

She started her career from TV serials making her start with the TV series called Avaghachi Sansar, which gave her a decent exposure in the world of acting. She got applauds from different camps that helped her get another TV serial called Swapnanchya Palikadle.

She is also attached to theatres though has not done much in it except the ones which she did in her struggling days. As far as films are concerned, she did her debut in M Town with the films like Friends with Swapnil Joshi. She is very much single and currently focusing in her career. She has also won a number of awards for her portrayal of Gauri in it.