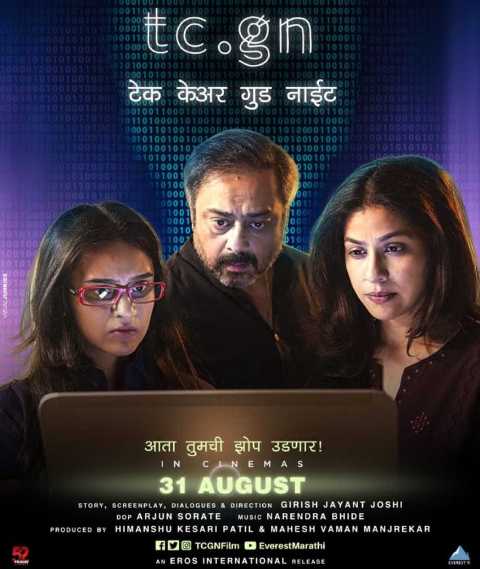 It seems that the M Town is not short of using English tag lines as their title for their films and we have yet another joining  in such a bandwagon of films. The makers of the film Take Care Good Night is back with the teaser after releasing a few posters and talking about the film. The film is all about getting abreast with the new technology that has been in place attracting not just the youth but also the older generations as well. The M Town film deals with the same when it brings out the newly developed generation together to give a film that deals with the modern day issues.
The film is directed by the popular writer and actor Girish Joshi, and it has already created some amount of buzz gaining appreciation in different film festivals and carnivals. The movie has Sachin Khedekar in it playing the role of a father, while Parna Pethe is playing his daughter in it whereas Iravati Harshe is also the mother and Adinath Kothare that remain as a surprise role and the movie simply seems to question the entire idea of ‘taking care’! Can we really be taking care of the loved ones when they are seen deep trouble? This film has a director who is also the writer of the recent TV thriller ‘Rudram’.
So for the fans of  a film with thriller genre can be truly be a treat for the audience. Moreover, the movie is produced by Mahesh Manjrekar, while it also has stars playing key roles . The film ‘Take Care Good Night’ which seems to be released in the theatres on 31st August! We are very much sure about this film, which the makers the initiate the new trend of thriller films in the M Town. Well, if you are yet to catch the teaser, have a look at the same. And stay tuned with us to know more about the film and others only with us. Lastly, do not forget to comment on the same.