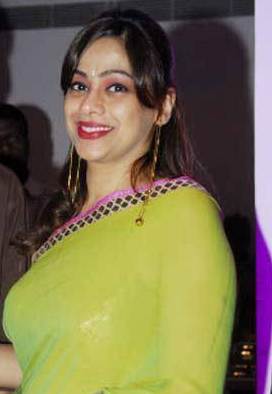 Medha wife of / Currently Married to Mahesh Manjrekar. In their family,they have two children – son Satya Manjrekar and daughter Ashwami Manjrekar. Medha Manjrekar has been in news for her incredible performance in the recently released movie (2016) Natyasamrat. This can make the Marathi audience to know about her life. Medha Manjrekar is no more an unknown name in M Town movies. Thanks to her incredible performances in a couple of Marathi movies. She was born and brought up in Mumbai and her date of birth is 28th April 1967, wherein she got her education. Since her childhood, she was active in cultural activities in her school and college, which made her roads to the world of acting. She is married to the popular actor Mahesh Manjrekar.

She started her debut in Marathi movie Aai, with the help of her husband. She then did a couple of movies, which include Rangkarmi, Yoddha, Navra Maza Bhavra and Koknastha. For the latter she was seen producing the film. Her upcoming film is Kaksparsh’, while her recently released movie Natyasamrat is a hit amongst the M Town audience. As far as her personal life is concerned, as she said she is married to the B Town actor and stays in Mumbai, while she has two kids – son Satya Manjrekar and daughter Ashwami Manjrekar.