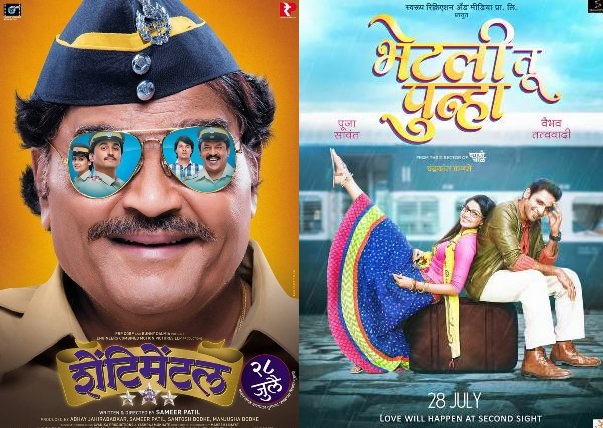 The M Town seems to be embarking with several movies and this Friday we had two movies hitting the theatres. These include Bhetali Tu Punha and the other  is Shentimental. Now, let’s talk about the box office story of the two. The film Bhetali Tu Punha is a comedy romantic movie, which seems to enjoy a decent rating in M Town hence the buzz seemed okay. The film bears some resemblance with the Imtiaz Ali popular movie called Jab We Met but it come along with a couple of changes in it.

Well, talking about the box office report, the morning shows witnessed a meager occupancy report but as time went and things turned into darkness the movie got a decent occupancy. The film managed to get a good collection at the box office at least if you compare with the other films in M Town. As per reports, the film managed to get 2.57 crores at the box office on its first day and as per experts the collection will rise the coming first weekend for sure. Now let’s talk about the other film called Shentimental.

The film Shentimental is an interesting flick in M Town which is directed by Sameer Patil and produced by Abhay Jahirabadkar along with others under the banner of RRP Corp. The film’s decent star cast with Ashok Saraf, Upendra Limaye, Vikas Patil, Pallavi Patil, Suyog Gorhe, Devyani Raghuveer Yadav and Ramesh Wani has created a good buzz in the media, which helped the film to gain a bit better than the other release in M Town the same day. So, as per reports, the first day box office collection for Shentimental tolled to around 3.40 crore. The experts now feel that the film will gain a good boost in the coming first weekend.