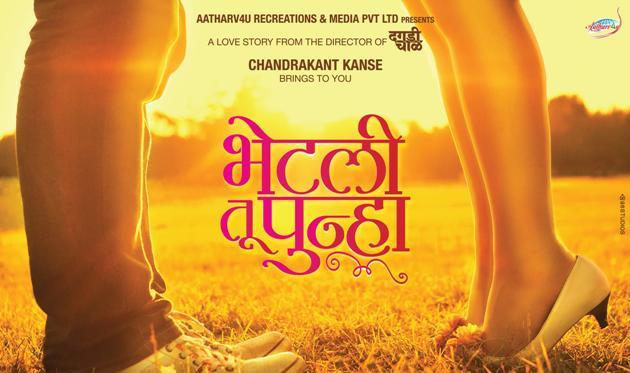 Though we find the millennial believing in arranged marriages? Do you mind if you find your soulmate passing through the systematic approach towards marriage? Can you really decide to lead a life starting thing in a mess not many would agree but a few would. One can face a number of such questions when it comes to traditional means of arranged marriages this modern day age. The film ‘Bhetali Tu Punha is all about answering these questions in a story of Alok Bhave (Vaibhav Tatwawdi) and Ashwini Sarang (Pooja Sawant). The film has the tagline ‘Love will happen at second sight, which perfectly describes the film’s plot’. The plot is all about Alok who is seek of going through the usual process of arranged marriage. He is already rejected 34 girls in total and when he rejects the 35th without any remorse he simply the lady with a little meh but the lady called Ashwini finds the man really intriguing and comes with her little heartbroken in order to find that he rejected her. When they meet again, while going for a solo trip to Goa, the man called Alok realises that committed a mistake, by judging Ashwini too soon. But it’s too late now, or is it?

The movie takes a refreshing take on arranged marriage system. The man who gave ‘Dagdi Chawl’, keeps the tone in very light, but at the very same time, his characters do make you question a number of things including age-old practices and the ridicule it offers. The performances of the actors are par and can be applauded a lot with their good screen presence and skillful acting. They tend to remain with flawless performances in a film having a quick-paced narration, and don’t forget to check the great camera work by Pradip Khanvilkar. Above all the melodious music by duo music director Chinar-Mahesh, Kanse really can be a great puller for the audience.

Shentimental Movie Review : The film is a roller coaster ride of Emotions, Reality and Humor