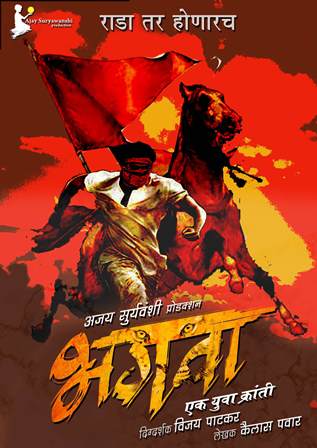 Bhagava – Ek Yuva Kranti is an upcoming Marathi movie that is expected to be released in the beginning of the New Year 2015. The movie’s producers re Chandrasekhar Shetty and Ajay Suryawanshi. Vijay Patkar is its director. The studio that was engaged for this movie is Ajay Suryawanshi Production. The movie start casts Sayaji Shinde in the lead role. Kailash Pawar is its Writer, while Rajesh Shirwadkar is its co-producer.

The muhurat of this movie was performed by Bhayyyuji Maharaj at the Suryoday Ashram in Indore, Madhya Pradesh. The film is to be directed by Vijay Patkar, the veteran Marathi actor. The muhurat of the movie was attended by Sayaji Shinde, Rajesh Shirwadkar and Kailash Pawar. According to the film’s producer on this occasion, the movie is expected to serve as a light house, exclusively for the younger generation and show them the right path towards success in life. He also said that through this movie of his, he would like to show as to why it becomes necessary for anyone to have the ideals of those of Chhatrapati Shivaji Maharaj to be awakened, especially among today’s youth, who are losing direction and taking wayward approaches.

The producer also expressed his desired to have this film made in Hindi and Gujarati. The search for an actor became important since the requirement was to know the three languages so as to play the central character with great conviction. Ajay had earlier made movies like Black Home, Remand Home and others, which enjoyed success.

This movie has been enjoying good reviews among the Marathi movie fans, who are expecting it to hit the theatres, so that they can have the pleasure of viewing it and to know what the director has in mind and to enjoy the skills of the artists in the movie.