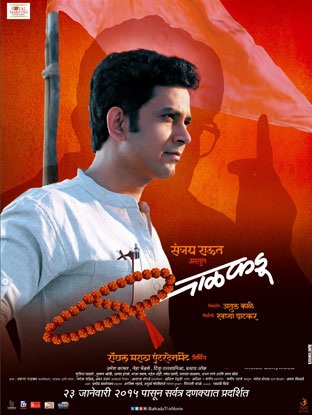 Balkadu, the much awaited and publicized film on Late Shiv Sena leader, Bal Thackeray, released today all over Maharashtra. The film is promoted as the official biopic on Balasaheb Thackeray. Umesh Kamat and Neha Pendse play the leading roles. Prasad Oak, Supriya Pathare and Pushkar Shroti and Anand Ingale are other actors who have worked in the film. The film got a moderate response from the audience with an average number of audience turning up to watch this biopic on Bal Thackeray.

The film , as expected , got a good response in the city of Mumbai which was the chief province of Bal Thackeray. It registered a total occupancy of 60 % in all theatres which has a high percentage for any Marathi film. Also in major cities like Pune, Nagpur and Nashik, it got a good response, attracting huge number of people. Not being a mass entertainer, the film caters to a limited number of audience that is the followers of politics in general or that of Bal Thackeray.

On the first day of its release, the film fetched itself a collection of 1 Crores. It has got mixed reviews from critics and audiences. Its collection is expected to shoot up in days to come. The total expected collection for the film, at the end of first week, is predicted to be 5 Crores

Previous Balkadu Movie Review
Next Which Company Would You Choose?