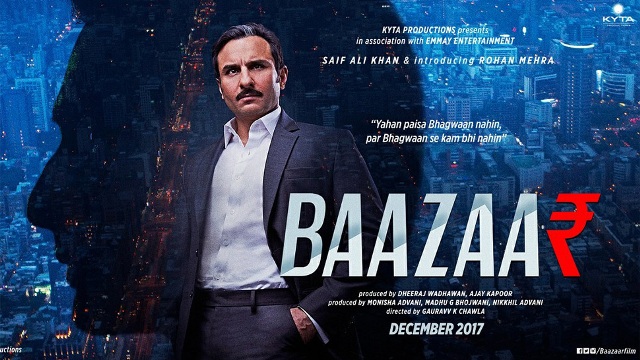 The B Town much awaited movies – Baazaar starring – Saif Ali Khan has finally hit the screens today. The film had a decent buzz in the media while it portrayed the lead actor Saif as a ruthless businessman taking care of the stock market. The man managed to get good reviews and then helped the film to earn a decent word of mouth buzz. But the fact the matter is the film did not perform the way it was expected on day one. The experts are expecting a surge in the first weekend as it will garner a decent amount of buzz in the coming weekend for sure.

The film opened up with low occupancy in the morning shows and later went on to snowball in the evening show giving a decent collection at the end of the day. As per reports, the occupancy was not less than 70 to 80 both in multiplexes and single screen in the major cities of the country including Mumbai, Pune and other cities. Yet it failed to garner the kind of figures as expected on the first day. As per reports, the 1st day box office collection for Baazaar was not less than 3.5 crore. Saif was applauded for his role particularly playing the Gujju business man with his acumen in stocks.

He was liked in his thriller drama movie that finally released and rest of the charm was done by the actresses found in the film. The young Rohan Mehra got a good chance to work with Saif and other senior stars and thus got a good exposure. This will be a decent film for him and a good opening for the actor in a big way. In the coming first weekend, the film Baazaar is likely to escalate in the coming two days as it will for sure going to escalate during the first weekend of its release. The film though faced the heat from the Ayushmann Khurrana’s film called Badhai Ho which has already scored 62 Cr and still moving ahead with the same pace. Stay tuned to know more about it.