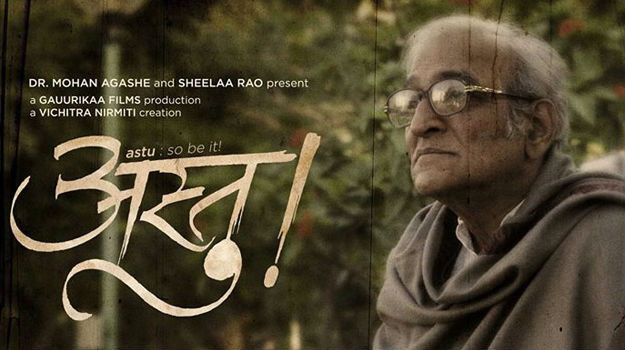 Astu made news even before its release when it won many awards and appreciation at international festivals. Marathi cinema is known for high quality content thanks to  many excellent films with superior story and performance that won accolades internationally. For few months now, Marathi cinema was flooded with commercial value films. For example Lai Bhaari that collected huge amount of money all over Maharashtra and still continues its run in few theatres. Poster Boys was a wholesome entertainer for the mature audience.

Astu is a film that caters to a different set of audience who likes to watch some “thinking” stuff. Although not an art film, Astu is for the mature viewers but not a money raker for sure. Thanks to its fame as award winner at movie events, it is expected to attract audience in its first week. On its first day of release it collected 10 lakhs and it is expected to get double on the weekend.

With no big stars to attract the young audience, Astu’s collection will depend highly on its first week collection which is expected to be high . With films like Ishqwala Love and Nati ready to take its place in the theaters, the overall collection of Astu is expected not to exceed 50 Lakhs.

Previous Movie Review : Astu is The Search For The Intangible
Next Swapnil Joshi Launches Swapnil TV For Marathi Entertainment Industry