Movie Review : Astu is The Search For The Intangible 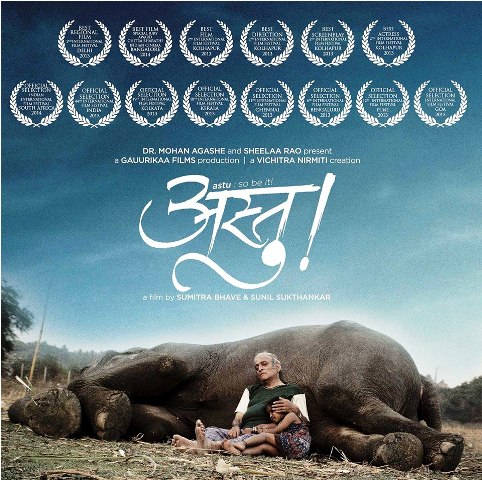 In Ms.Sumitra Bhave and Mr.Sunil Sukhtankar directed Astu, Mohan Agashe plays the character of a old man who loses his himself to Alzheimer’s disease. His struggle to regain his identity and his mind , he reaches an unfamiliar

place and befriends strangers in his quest to regain his own self. Family relations undergo transformation and life walks strange paths on this new journey for Dr. Chakrapani Shastri.

His daughter Ira played by Iravati Harshe tries had to restore memory and good health to Dr. Shastri but as fate would have it, he goes missing and the family suffers from his loss. Milind Soman plays an interesting character of Ira’s husband. He is a source of comfort to Ira and also serves as third person view for the crisis between the father and the daughter.

Away from his real family, Dr. Shastri, in his dementia, is given shelter at a mahout’s house. His wife, his family and his elephant Laxmi offers him a new family. Mind, in its erring, creates new relations for Dr. Shastri while his original family suffers loss.
Ms.Sumitra Bhave & Mr.Sunil Sukhtankar directed Astu which was showered praise by audience and critics alike in various international festivals. Among the array of commercial films releasing this season, Astu is a peaceful respite. ,Dr.Mohan Agashe,Iravati Harshe,Milind Soman,  the films’ cast is apt. Mohan Agashe comes through as a comeptent actor for the role. Iravati Harshe portrays the emotional turmoil of the daughter excellently. Milind Soman once again plays his part in a convincing manner. Others including Amruta Subash, Nachiket Purnapatre& Devika Daftardar are also fine performers in the film that requires exceptional acting skills. Astu was shot at Bapdev Ghat Hills near Saswad ,Pune .

Astu is a film about losing and finding! I agree that sounds philosophical but it does describe the Mohan Aagshe starrer to an extent. It is a film that critics called a layered work. Sometimes understanding only what appearance on the surface is not enough.  Again that philosophical but you can like this film even if you are not philosophical. Astu is touching. Astu is realistic and makes you thinks deeper about life.