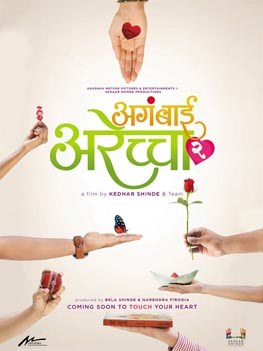 The movie ‘Aga Bai Arrecha’ was released way back in 2004 was a total hit with the Marathi fans. It was Kedhar Shinde’s directorial venture and was considered to be a surprise hit at the box office.

The movie which features actors like Dilip Prabhavalkar and Sanjay Narvekar was loosely based upon the Hollywood movie “What Women Want”. Presently, after a long time of eleven long years, Shine has been termed to be back with its sequel which is a comic caper starring Sonali Kulkarni. The first look of next chapter of this comedy which is called Aga Bai Arechyaa 2 had been released recently on the event of International Women’s Day in presence of the who’s to who in movie industry which includes the likes of Vandane Gupte, Varsha Usgaonkar, Pratiksha Longkar, Sharman Joshi, Vijay Patkar and others.

Besides Sonali, the movie stars Bharat Jadhav and Prasad Oak in vital roles. This movie is expected to be released in theatres on 22nd May’ 2015. The official trailer has been recently released which has won raving reviews from the Marathi fans.

It is a Marathi Romance, drama movie and its director is Kedhar Shinde, and the producer is Bela Shinde and Narendra Fiordia. This movie has been produced under the banner of Anushka Motion and Entertainment.