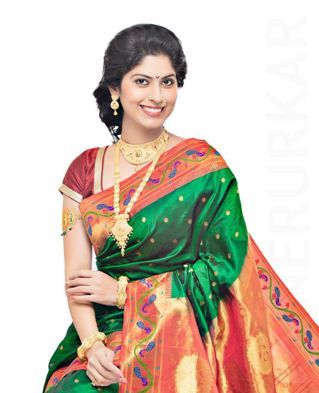 Abhidnya Bhave is an TV and film actress who is active more in Marathi TV shows and Cinema. She hails from Mumbai and was born and brought up at the suburb called Vasai. She ws born on 13th March 1989 and completed her schooling and college from Mumbai itself. She did her bachelor’s in commerce from DG Ruparel College Mumbai. Ever since her childhood, she was fond of films and TV that finally made her enter into this domain after she completed her studies. She comes from a simple family with her father a school teacher and mother a house wife. She is married and tied her knot in 2014 and her husband is a pilot at Jet Airways.
Talking about her career she started with participating in a Beauty Contest called Shravan Queen, which is a regular feature of Maharashtra Times, while she remained the finalist of this contest in 2010. Before entering into this domain she also worked with Kingfisher Airlines and worked as an Airhostess. However, she was spotted by some filmmaker from M Town to get the offer and soon was seen in a Marathi movie called Langar in 2012. She then got the chance to be the part of the TV Show called Devyani aired on Star Pravah. She then got a cameo role in the popular TV show at Sony TV called Bade Acche Lagte Hain.
Since then it was no looking back for the lady as she did a couple of other TV shows, which included Lagori – Maitri Returns (Star Pravah), Khulta Kali Khulena (Zee Marathi), a web series in 2017 called Moving Out aired at YouTube. She then got another TV shows at the popular TV Channel called Zee Yuva called Katti Batti and Tula Pahate Re. The year same year in 2018, she was seen participating Maharashtracga as a Contestant in Sony Marathi. Besides, acting, she has also invested in a fashion world embarking upon her own ethnic wear called Tejadnya with her co-actress and friend Tejaswini Pandit. This brand deals with ethnic wear particularly the Sarees. Stay tuned to know more about her and others.
Share