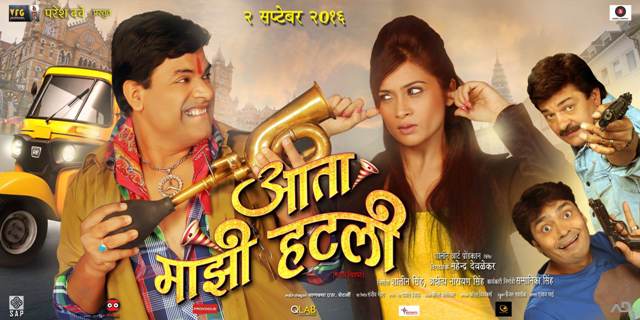 What is it About ? Aata Majhi Hatli is a comedy drama with too many twists and suspense. Neha ( Ruchita Jadav) is an independent and bold girl who sets out to catch a criminal. Bharat Jadav plays Shankar, the autowala whom Neha believes to be have committed a murder. To nab the criminal, Neha , lays the trap of marriage. After she apparently falls head over heels for Shankar, she insists on marrying him. Later as the marriage progresses, we discover the marriage is a trap. What happens next? Whether Shankar proves to be innocent or whether he murders Neha to conceal his crime is the suspense. Aata Majhi Hatli has a plot that is not intriguing yet it keeps you interested till the climax and what a climax it is! The story simply turns absurd and the characters lose their fun as the film drags towards end.

The Plus Points : Ruchita Jadav is Bold and Beautiful while Bharat Jadav is at his comic Best . In a film that fails to deliver to the audience’s expectation, Bharat Jadav , known for his delectable comic skills, saves the film with his efforts. The direction is Average and music is a total failure.

The Negatives: With performers like Ruchita and Bharath, a better script and screenplay and would have made it very much watchable. But the film simply disappoints with a story that is dull an unexciting. There is nothing for the young audience to watch. Comic sequences are weak and ineffective.

The Performers: Ruchita Jadav stands out as she delivers a strong and effective performance. She matches shoulder to shoulder with Bharat Jadav who is funny as ever. In a film that has comedy, action and suspense Bharat’s performance stands out. Apart from the lead actors, Vilas Ujawane, Kiran Sharad, Amey Hunaswadkar are also delectable to watch.

Script,Music and Direction : The film is simply not made for today’s generation. It deals with comic situations and story threads that are for the senior audience. It is neither for the masses nor for the classes. Script is to be blamed for it. Plus, the screenplay is weak and dull. Direction just does not stand out. Action sequences do not provide any excitement to the audience. Music is common place and fails to create any waves among the audience. The two highlights “ Popat Kela Re” and “ Ishqat Padli Sajna Re “ are merely average songs. The lyrics is very commonplace and effortless.

Why Should you Watch it? For the performances! Bharat Jadav , the once popular star of Marathi cinema has not yet lost his charm. As an auto driver and as a goon Bharat is impressive. Another attraction is definetly Ruchita Jadav who looks and acts very much a street smart and courageous Marathi mulgi. She performs stunts and fights with Shankar yet plays the lover girl to the hilt. Both the actors are convincing and natural.

The Last verdict: Aata Majhi Hatli is an average Time Pass movie with everything average and below average about it. Highly Recommended for Bharat Jadav fans.