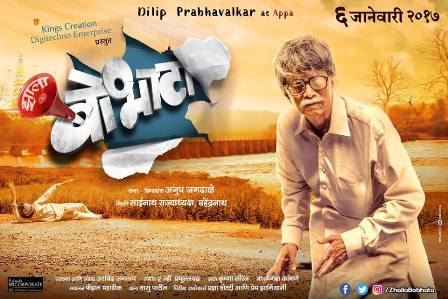 The M Town has two films released this Friday, which certainly include the rural comedy Zala Bobhata. The Anup Jagdale film had a bad time when it comes to promotion, which has failed to garner much of the word of mouth buzz in the media. The Vidarbha Pictures based movie also failed to get a good rating, which again came in its way to render positive vibes for the film giving a low collection at the end of the first day.

As per reports, the first day box office collection for Zala Bobhata tolled to around 70 lakhs which is simply the figure the movie deserve both in terms of movie content and rating. The other reason of the low collection at the box office was primarily due to the clash of other Marathi movie – Ti Sadhya Kay Karte. All in all the film had a bad day on the first day which is likely to remain the same in the first weekend of the film.

The experts feel that the lack of promotion in the media along with getting negative rating for the film has together ruined the things for the film to create the right kind of buzz in the media. And the rest of the damage was due to the clash of the film that will certainly make things from bad to worse for sure. The trade pundits are not at all sure whether the film will get a boost in the coming weekend hence the overall picture of the film is not at all rosy.