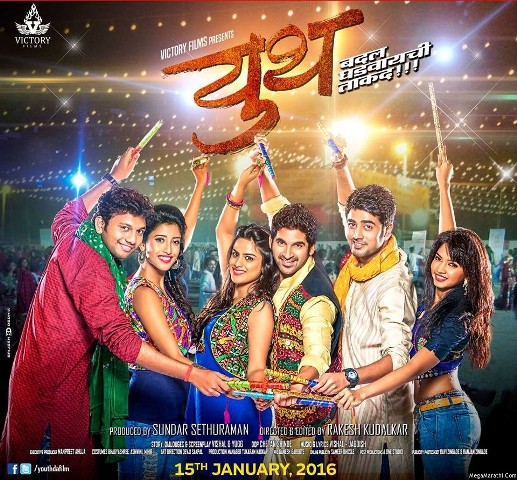 The M Town has two movies releasing this Friday, which certainly include the much awaited film called Youth. The movie Youth with a couple of delays has finally released today. It is youth centric film as the film’s title suggest, which is produced by Sunder Seturaman under the banner of Victory Films, while directed by Rakesh Kudalkar. The film has an interesting cast having both the youth and few veterans including Akshay Waghmare, Neha Mahajan, Akshay Mhatre, Meera Joshi, Shashank Jadhav, Ketaki Kulkarni, Satish Pulekar and Vikram Gokhale in the lead and supporting roles. The story comes from Vishal Chawan and Yugg, while the music is carried out by Vishal Jagdish and the photography is carried out by Chetan Shinde. Now, time to dig in deep into the film to catch the gist of the film as under:

The film deals basically with the issues of youth. You can find it to be distributed roughly in three halves. The act one introduces with the main characters, while six of them. Of all the characters, Yuvraj played by Waghmare and Yutika played by Mahajan being marginally well developed and their way of thinking and so one, while others are simply the fillers as the script demands from a group. You can find Yuvraj to be the father of the politician played by Vikram Gokhale and though these are mutual cordial and there is barely any real love in it. The first act has three young actors playing in the film the role of college students. They are seen in all the light activities right from singing songs, to playing and having fun to playing some amateur street play competitions. These are good kids with decent background and a feeling with social responsibility.

The second act in the film is about the kids who are seen going for a picnic and on their way they come across a drought struck village and they are shell shocked to see the state of affair. They do not understand political corruption and hence they feel that the government will pour in with help immediately. Yuvraj is seen taking up the promise of doing things as help fails to come to the village and resolve things seeking the help of local villager. Next what happens is interesting to catch up in the film?

The films with message at the center needs to be carefully crafted about the climax as it can perplex the audience and the message conveyed would be difficult to understand. Hence when you have a film like Youth, which deals up with issues like farmer pleas, drought economics and corruption, it ends up with a negative mark suggesting that nothing would change. Regardless to the fact that whether you try or not, you are bound to falter.

Talking about the performances, Neha Mahajan in this film appears to be a fitting one, while Akshay Waghmare who happens to be the grandson of Marathi legend Dada Kondke, he seems to be the wrong choice for the character given in this film. Others in the film look amateur in their performances, thanks to the too many people roped in this movie, who do not have enough opportunity to prove their skills over the silver screen. The fact is the film has too many actors in it, which gives you very less opportunity to score point with its script and performances. And above all, the amount of factual flaws and errors showcased in the film appears to be visible in the film, which together has hampered the overall look and feel of the movie. Direction, editing and other technical elements too had some flaws, which have simply hampered the deal in a big way.

The film Youth has too many issues to worry about. In fact is a classic example of the old said axiom too many cooks spoil the broth. Hence the long star cast is unable to give much to the audience but has created a haywire in the film giving fewer amounts of opportunities to worry. In terms of performance the huge star cast in the film managed to falter over the silver screen in a big way. It seems that the director has failed to extract the potential required for slew of actors roped-in over the film. This has therefore hampered the rating of the film.