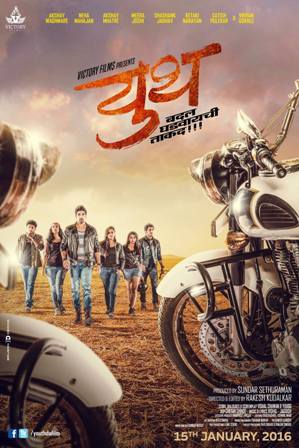 These days you can find a new trend in M Town dominating the movies releasing in the recent past. The trend is having an English title seems to be on a higher side as most of the film are released with a English title and Youth is no exception. The film is directed by Rakesh Kudalkar, while produced by Sunder Seturaman under the banner of Victory Films. The actors in the main and supporting role include Akshay Waghmare, Neha Mahajan, Akshay Mhatre, Meera Joshi, Shashank Jadhav, Ketaki Kulkarni, Satish Pulekar and Vikram Gokhale. The interesting star cast along with talented crew of the film will give the audience a subtle entertainment stuff to the Marathi audience.

The film Youth is all about showcasing young people, their life, views and ideas they have in this contemporary developing world. The movie has showcased how the power of youth can make or mar any society. The film is shot in places like Goa and Kolhapur. Though the film is completed and was supposed to release in January 2016, however, it was pushed forward to release in February but again was postponed with no release date. May be the filmmakers are unable to find a suitable date for the film which is the key reason of the delay in its release. Keep checking the updates with us.