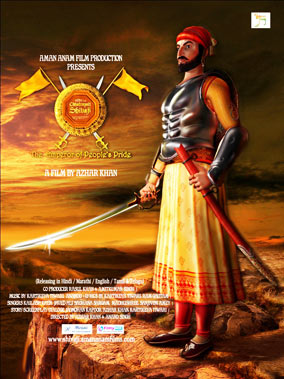 Unlike B Town film career, Riteish Deshmukh is seen doing great guns in M Town. After his stunning performance in films  like Lai Bhari, he is back with another venture called Chhatrapati Shivaji, which is produced by him and his wife Genelia D’Souza under the banner of Mumbai Film Company. The film is directed by one of the talented filmmakers of M Town – Ravi Jadhav. The filmmakers are still to disclose the details of the film especially the star cast as we just know that Riteish Deshmukh would be doing the main lead in the film playing the character of Shivaji Maharaj.

Chhatrapati Shivaji Maharaj is not just linked to any Marathi Manoos but his legacy and persona has been the fascination for one and all. His name simply brings alive the glory, honor, pride, victory and history with this name. Marathi Cinema has been often seen experimenting on this subject and have made a couple of movies in the first. This upcoming film by the Deshmukhs would have something really different in their films, which will glorify the aura of Shivaji Maharaj in their upcoming film Chhatrapati Shivaji. Stay tuned with us to get the latest updates on this movie and other Marathi movies. The film releases on 5th August 2016 amidst the Independence Day season of this year.