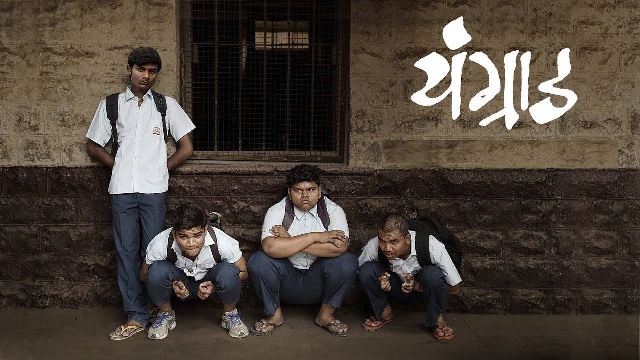 Movie – Youngraad
Director– Makarand Mane
Star cast -Chaitanya Deore, Saurabh Padvi, Savita Prabbhune, Monika Chaudhari, Shiv Wagh & Jeevan Karalkar
Producer– Vitthal Patil and Gautam Gupta
Studio – Vithal Patil Productions, Future Works Media & Phantom Films
Rating – 2.5
Story
The film deals with the tumultuous journey of four friends who take their lives lightly until they get an ugly turn compelling them to realign and redefine their options. The filmis made at the backdrop of MS City Nashik.
Review
As we know Phantom films is known for venturing into realistic human stories with small town politics and crime at the backdrop, we see in Youngraad similar pattern with director Makrand Mane showcasing the psyche of his characters so well. They seem to have foolhardy while their transition seems to be thinking like adults that tend to give an ugly reminder of how the life of individuals change with the events in his or her life. The first half is all about the youth activities and then comes the second part wherein we see the boys taking the patronage of a local politician hiring them to work for him. Then comes the rebel that turns the table making the film interesting to catch.
The crux of the film is the friendship of four wayward teens and the way their understanding about the world is seen changing. But soon the film becomes predictable giving room for understanding and the one that has worked better if it was not meant for the random characters that tend to get the undeserving footage. The shifting focus in terms of intent of making this movie seemed to be staying true to its story then makes the film otherwise compelling or else the overall story gives a sluggish content to watch. The young actors have performed in a realistic film and so are the ladied roped in in the movie. The others too have performed better. The other elements of the film including music, songs, screenplay and other elements seemed okay somewhere boosting up the entertainment value.
Youngraad The Last Word
The film has an interesting message to give when it comes to the climax of the movie that shapes the life of the four boys. Though it turns sluggish to some extent but in the longer run has something interesting to share making a decent watch during the weekend. So, what do  you say about the film, do comment and let us know your views on it.