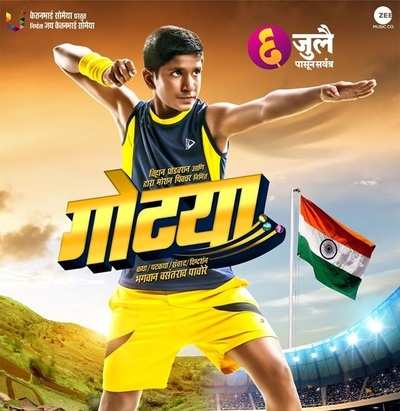 Film – Gotya
Director – Bhagwan Vasantrao Pachore
Star cast – Sayaji Shinde, Rajesh Shringarpure, Anand Ingale
Producer : Jay Ketanbhai Somaiya
Studio : Vihaan Production Pvt Ltd and Dwara Motion Pictures
Story : Bhagwan Vasantrao Pachore
Rating -1
Story
The film is all about a village school boy, who seems to be obsessed with playing marbles, who tries to persuade his parents about the school and the sports authorities for accepting it as a legit sport. So, what happens the next is interesting to catch.
Review
With this film the director has an intention to tickle your funny bone but thanks to  the bleak puns and humor it would barely impress you and the audience at large. Now, if you look at the story we see Gotya is born and brought up with a marble in his mouth. This was accidentally swallowed by his mother while she was expecting the baby and then we see the boy growing close to the game of marbles and thus seen taking himself to get recognised as a sport. The story is something like a weird one to hear and believe and yet the makers had the guts to venture in the form of a film.
He then goes on to participate in a number of national and international competitions and soon you would find this improbable storyline getting more unrealistic and weird when we see the kid getting attacked for his talent and is soon is the target of rival team’s coach. The movie talks about youngsters playing the game of marbles and then is seen wreaking havoc in the village. So, all we see is something really not at all interesting and annoying. There are some innocent puns and jokes that these seemed vanishing soon. The way the makers have designed the character is simply exaggerated, and hackneyed and has taken the innocence away. The script has fewer chances to be salvaged while the talented actors Rajesh Shringarpore and Sayaji Shinde present in the movie  are simply wasted. The kiddo is good in his acts but has been wasted yet to show him something really different and incredible.
Gotya the Last Word
The story of the film has been weird thanks to the makers who have ventured in something that are simply not worthy to experiment. The makers have failed to impress the audience in any way and hence if you are planning to catch the film then consider it on your own risk. You can certainly miss this film.