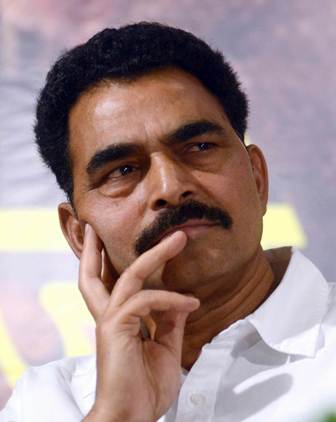 In a story of rags to riches, Sayaji Shinde who became a watchman in his youth turned into a talented actor acting in more than four regional languages. Sayaji Shinde is recognized as one of the revered senior actors and has literally touched each genre of movies. No shade of human life is untouched by his acting talent.

Born in Satara district of Maharashtra, the actor was drawn towards theater in his youth when he was employed as a watchman. He played the lead in a play titled Hijda , which brought him huge fame and paved the way for his career in the Marathi film industry. After entering films in 1978, today he has acted in Marathi, Hindi, Tamil , Telugu , Kannada and Malayalam films.

Shinde’s noted films in Marathi include Aai, Katha Doan Ganpatraonchi, Jai Maharashtra, Gallit Gondhal Dillit Muzra, Tambyancha Vishnubaala. He has been associated with negative roles most of the time. Going by his looks he has more than often portrayed villain characters specially in Telugu films. But the actor has also excelled in comedy. His presence in comedy flicks has been very popular and the actor has succeeded in producing rib tickling humorous scenes. Gallit Gondhal Dalit Mujra was one such film in which he paired up with Makrand Anaspure , another senior comedian in Marathi . The film was a blockbuster in 2011. The film’s sequel Punha Gondhal Punha Mujra is once again set to create laugh riot on October 10 2014.

In Hindi , the actor has played numerable characters including both comedy and serious. Though negative roles were preferred for the actor, he has also been a part of comedy film like Jodi no. one, Mujhse Shaadhi Karogi. He impressed everyone with his impeccable acting in the films like Sarkar Raj, Kurkshetra and Shool. For Shool and Kurukshetra , he received Filmfare nominations. As Karunesh Kanga in Ramgopal Verma directed Sarkar Raj , he was highly impressive.

In overseas films The Whisperers and Rocking Meera , he has played significant roles. In Kannada, Telugu, Tamil and Malayalam films also he has established himself as a popular actor.

Though he has done more films in other regional languages than in Marathi, Shinde has a special liking for Marathi films and theatre. Having been in films for about 3 decades, he loves to experiment with characters and plays all kind of roles with equal passion.