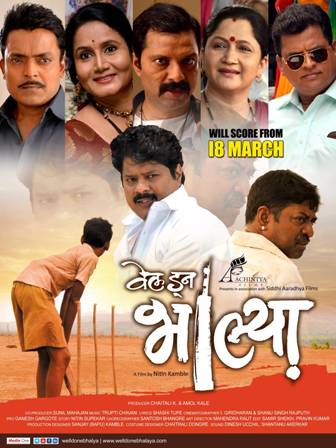 The Marathi Cinema is known for embarking movies of different subject and content, which otherwise would appear to be very much different from the conventional mainstream movies. The film Well Done Bhalya has Sanjay Narvekar, Nandkumar Solkar, Alka Kubal and Ramesh Dev in the lead roles, while Sanjay Khapre, Mitali Jagtap, Sharad Ponkshe, Ganesh Yada and Rajesh Kamble in the supporting apart from having a slew of actors from M Town. The child actor Nandkumar Solkar has played the lead character of Bhalya in the film. The movie is directed by Nitin Kamble and produced by Chaitali and AmolKamble under the banner of Achintya films in association with Siddhi Aradhya Films. The film is about father and son relationship.

The film shows a young boy and his love for cricket takes him away from his education and working in the market to sustain his family against all the consent of his father. It showcases the notion that if you have passion for anything, it can overshadow all the odds coming in your way unlike the little boy faces including the malice and hatred of the rich who are the part of his area cricket club to the influential people who want to reject this boy from village to play the sports. The film’s story comes from NitinSupekar, while the dialogues and screenplay is carried out by the director himself. The movie is releasing very soon.