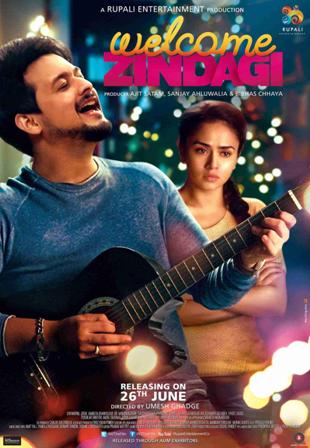 The hit formula of Marathi film industry, Swapnil Joshi will be seen playing the protagonist in the movie, Welcome Zindagi.

Welcome Zindagi is directed by UmeshGhadge and produced by Sanjay Ahluwalia, AjitSatam and BibhasChhaya. Apart from Swapnil Joshi, the movie stars AmrutaKhanvilkar as the female protagonist, along with other actors like Satish Alekar,Mohan Agashe,Prashant Damle,RajeshwariSachdev,Bharti Achrekar,Murli Sharma,VivekLagoo,PushkarShrotri,Urmila Kanitkar-Kothare, and JayantWadkar. Mahesh Manjrekar will also be seen in the movie in a special appearance.

Welcome Zindagi is a dark comedy movie revolving around Meera, played by Amruta. Meera is in such a stage in life, where she feels ignored and betrayed by the people whom she loves like her father and her fiancé. Things are just not working in her favour at work too, so she decides to end it all by taking her life.

And at the very moment when she is about to take the step, AnandPrabhu, played by Swapnil enters the scene. Anand runs an organization by the name of “Happy Ending Society” where people who want to commit suicide are taken to a 3 day suicide camp to teach them expert tricks of ending one’s life. Anand offers Meera to join the camp which she does. But happens next?

Well, for that you will have to watch the movie, releasing on 26th June this year. Be sure to book yourself a ticket of this poignant story that is presented in a very entertaining manner. Written by Srijith Mukherjee, the music composition has been done by Amit Raj, Pankaj Padghan, Soumil& Siddarth.