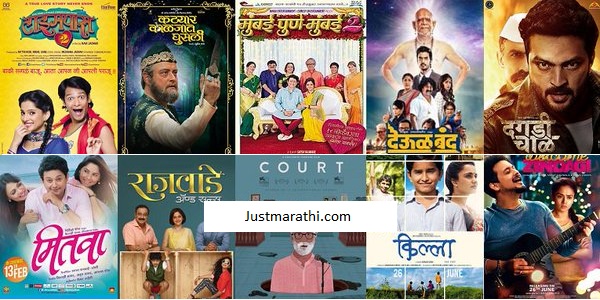 Since past one year, the Marathi industry has produced some of the best Marathi films. Some of them even managed to get screened at the known and much acclaimed film festivals. Many of these films have managed to get a decent collection of the box office turning out to be a good grocer in M Town. It would be therefore interesting to catch up the list of highest grossing Marathi movies as under:

Sairat – The film is making waves in the current world. With a good 1st weekend opening of around 12 crores, Sairat having two young actors doing their debut in the film managed to give one of the best business to its makers. The Nagraj directed film managed to get 26 crores in just one week, which is actually a decent figure. Till date the movie has collected 40 plus crores making it the top grocer of 2016.

Natsamrat : As per reports, the total box office collection for Natsamrat tolled to around 40 crores, which is actually a decent amount. The film is still running in single screens and multiplexes raising the collection high over the box office. Stay tuned, to get the recent collection amount of the film Natsamrat.

Katyar Kaljat Ghusli – It was one of the M Town movies, which created stir when it hit the theatres. Thanks to the concept of the film which was based on a popular play with same title showcasing the two musical groups found in a spat. The film managed to collect a collection of 31.5 crores.

Lai Bhari : Lai Bhaari has taken Marathi cinema by storm. Statistics indicate a decline in the collection towards the fourth week. The total sum of collection was to be around 40 crore by analyst.

Time Pass 2 – The Ravi Jadhav sequel managed to do a better business over the box office. In fact, the Marathi audience went crazy as the director embarked with the film, since a majority of people liked the prequel. The collection of TP2 was 40 crores, which is a huge amount in M Town.

Mumbai-Pune-Mumbai 2 – Another sequel, which managed to spread its charm all across the M Town. The film was a romantic drama, which directed by Satish Rajwade having an interesting star cast with Swapnil Joshi and Mukta Barve. The film managed to secure 17 Crores.

Deool Band – This film is considered to be a millstone in M Town with rich plot but with several flaws as well. Yet the film managed to get a good moolah at the box office giving top benefits for its makers. As per report, the collection of the film tolled to 16 crores.

Dagdi Chawl – This film managed to get a decent response in Marathi circles, which is actually a language action drama thriller movie. Being directed by a debutant director, yet it managed to give the audience a decent amount of Moolah at the box office. The movie collection tolled to around 15 crores, which is indeed a good figure for the makers of the movie.

Rajwade and Sons – This Marathi movie film has managed to go for a decent showbiz over the box office collection. The film though is a family drama but it managed to give a decent collection tolling to around 12 crores.

Court – The movie needs no introduction especially for the ones who love Marathi movie. This same film had managed to get selected for the Oscars giving away a decent collection as well. The movie has managed to get a collection of around 11.45 crores with a debutant director in it.

Welcome Zindagi – This film also managed to get good moolah at the box office, which includes around 10.70 crores making it a worthy film to be counted in this list.

Khwada – Unlike the others, this film also managed to secure good over the box office giving an amount of around 10.45 crores.

The M Town is nowhere lagging behind in making rich content films, which are being now taken seriously. The above are some of the glimpses of the top grossing films in M Town. Many feel this is simply tip of the iceberg.