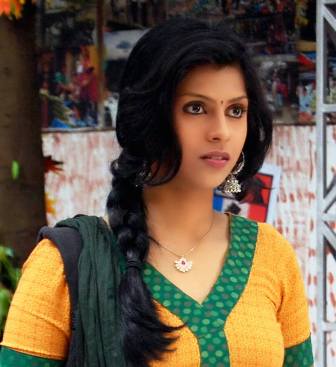 Swarda Thigale is a familiar name in Marathi Cinema circles who was born on 2th October 1993 in Pune. She was born and brought up at the cultural city of Maharashtra wherein she did her schooling from the known Sinhgad Spring Dale School from the same city and went to Fergusson College to do her bachelor’s in arts course. Since her childhood she has been involved in learning dance like Indian classical Kathak and even the western Salsa. In fact the very dance has helped her to get a break in small screen giving her one Marathi serial called Majhe Mann Tujhe Jhale in 2013, which was aired over the Marathi ETV channel. In fact, the role she got in the serial was impressive enough to make herself popular in the media and Marathi audience.

Since she was keen in dancing and singing, hence also got the drama or theatre called Vadal Ya Krantiche wherein she did the character of Ramabai Ambedkar. Her work had a great volume for her performance over the small screen, which further helped her to get her first Marathi movie called Thoda Tuza Thoda Maza in the very same year 2013. Since then she has been a regular face in Marathi TV world apart from being a star in making for the Marathi Cinema. As far as her personal life is concerned, she is dating no one and live with her family in Pune. Besides, she has also been the face for different brands while doing their ads, which include the soft drink – Sprite and has even walked over a number of ramps as well.