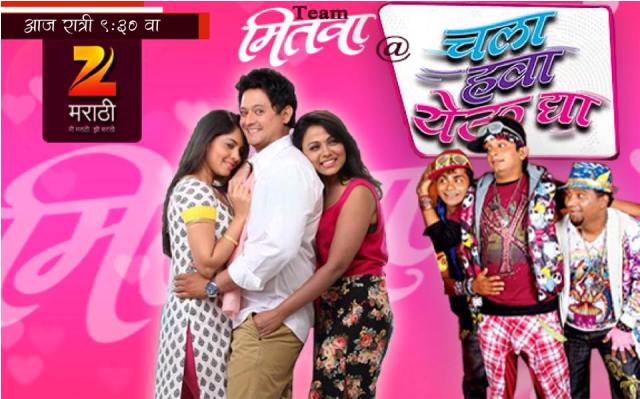 Swapnil Joshi will be appear on the popular comedy show Chala Hawa Yevu Dya on Zee Marathi. The show that is aired on Zee Marathi every Monday and Tuesday will host Swapnil Joshi and Mukta Barve tonight at 9. 30p.m. The two stars will be seen sharing laughter with the hilarious cast of the show which is an adapted version of Comedy Nights With Kapil , the Superhit show aired on Colors.

Swapnil Joshi and Sonalee Kulkarni will be promoting their upcoming film Mitwa on the show Chala Hawa Yevu Dya. Mitwa is a love story which stars Sonali Kulkarni also along with Swapnil and Mukta. The film will release on 13th February across Maharashtra. As in the hindi version of the show, personalities from Marathi film industry have visited this show for promoting their films.

Recently, the team of Mitwa , consisting of Swapnil, Mukta and Sonali visited Frames Festival in SEISA College for the promotion of their film. They received an overwhelming response from the students and audience.

Mukta Barve, who started her acting career from Television is all excited to make an appearance on the small screen once again.

The show will be aired on Zee Marathi on 9.30. p.m. tonight. The star cast of the film consists of Nilesh Sable, Khushal Badrike , Sagar Karande, Bhau Kadam, Bharat Ganeshpure and Mansi Naik.