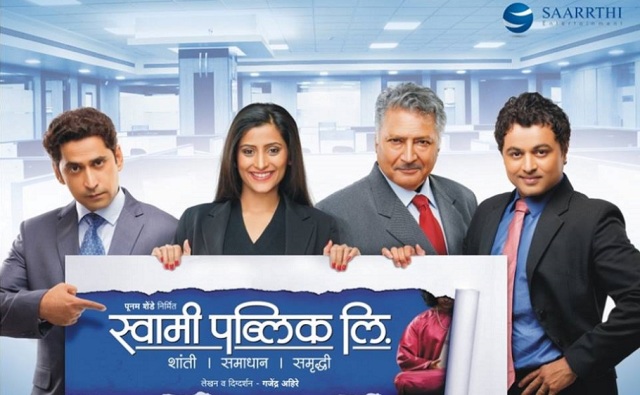 Power is corrupt .True! What about religion? The race for power and money is an ugly dark race. It will test your values and humanity. But one thing is common among those who fight for power it is lust for money. A well crafted script and an interesting plot are the positives about Ganjendra Ahire directed Swami Pubic Ltd. Subhodh Bhave, Vikarm Gokhale and Chinmay Mandlekar and Saunskruti Kher and Vinay Apte play the lead roles. A business enterprise launches their new venture and interestingly it is titled Swami. Eventually it becomes a dark game of blind and mad power leading to lethal conflicts. Amidst the changing priorities one thing remains constant among the members of the group. It is their quest for money and power. Swami Public Ltd is suspense and thrill and shows a true face of the economy in developing countries like ours. The blind adherence to religious practices is also mirrored.

In a well built script that balances both suspense and drama equally, Swami has some powerful performances by Vikram Gokhale playing a business tycoon. Subhodh Bhave who plays a successful reckless businessman is also impactful and convincing. The other actors Chinmay Mandlekar and Saunskruti Kher have also done full justice to their respective roles.

Director Ganjendra Ahire has taken up a subject that is not novel but it is impactful and dramatic. In the process of dramatizing the Swami, somewhere you will find the story losing its pace. But there is surely one thing he has succeeded at – that is bringing out wonderful performances from the actors. Vikram Gokhale and Subhodh Bhave stand out for their powerful acting. Vikram is every bit the staunch experienced business he portrays. Subodh once again brings a new shade to his acting. The music by Uttam Singh is dramatic in the otherwise dramatic film. The editing is thrift and economic.

Swami is a treat if you like thrillers. Swami is an entertaining if you like political and business dramas. So go for Swami this weekend for a thrilling experience.

Previous Happy Journey Review : Is A Delighting Treat
Next Celebs wish Riteish and Genelia on twitter on becoming parents