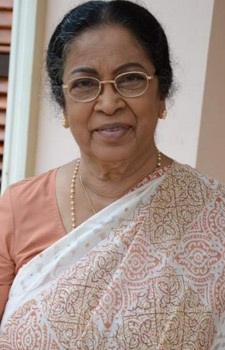 A revered thespian and a recipient of many awards from the theatre and film fraternity, Sulabha Deshpande is an actress par excellence. At the age of 78, Sulabha still continues to do splendid work with same energy and enthusiasm that she had begun with over five decades back. Her humility and generous nature makes her a much adored personality among her peer group and her juniors.

Hailing from the land of dreams , Mumbai, Sulabha Deshpande at the start of her career, worked with the great thespians of Marathi and hindi theatre like Vijay Tendulkar, Vijay Mehta and Satyadev Dubey. The actress worked in innumerable plays in both Marathi and Hindi languages and soon made a mark in hindi films also. She has essayed many role of mother, mother in law and even Grandmother. She played memorable characters in Bhumika ( 1977) , Gaman ( 1978) , Ijaazat(1987), Ghar Ho To Aisa ( 1990), Virasat ( 1997). Shyam Benegal’s movies , in particular, gave her many memorable roles in the era when parallel cinema was flourishing.

Sulabha Deshpande , recently , essayed the role of the mother of law of Sridevi’s character in English Viinglish. She also worked in the Marathi films Haapus and Mala Ai Vhyachay recently.
Sulabha is not only associated with acting but has also done splendid work in the domain of theatre and encouraging young actors. In the training institute which she set up with her husband, famous actors like Nana Patekar and Urmila Matonkar have taken trainees. She also runs an institute for children who want to oerform on stage and hone their acting skills . The institute is known as Chandrashala.

Sulabha Deshpande lost her thespian husband Arvind Deshpande , with whom she had started her career, in 1987. Her theatre group Awishkar continues to encourage young talents in acting and Chandrashala continues to instill in children passion for theatre performances.

Sulabha Deshpande died at her Mumbai residence on 4th June 2016 after a prolonged illness.