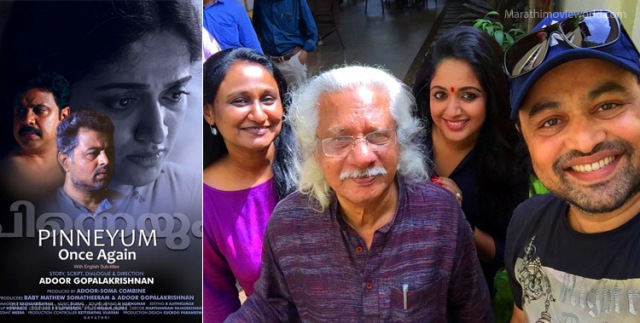 Two weeks after the release of Pinneyum , which is a Malayalam movie starring lead actors Dileep and Kavya Madhavan , Subodh has impressed the Malayali audience. The film attracted attention all across the state of Kerala as it is directed by none other than Adoor Gopalakrishnan who has won National Awards 16 times till now. This much awaited film comes after the veteran director’s repose of eight years. Pinneyum’s release on 18th August was the talk of the town in Malayalam film fraternity.

Reports say that Pinneyum, despite of it having commercially bankable actors like Dileep and Kavya Madhavan did not do any miracle at the box office. As it was not a film for the masses but a film for the classes, it attracted a reasonable good audience and went down well with the critics. Subodh, who was an unfamiliar face for the Malayali audience served as a great ambassador for Marathi film industry. He impressed audience and critics alike and called for attention for his powerful performance.

Subodh had earlier expressed his great elation at the opportunity to work with veteran director Adoor Gopalakrishnan. Subhodh had earlier made his presence felt in Hindi films by debuting in the movie Aiyya which starred Rani Mukherjee and Malayalam actor PrithviRaj. Pinneyum was his first movie in south Indian languages.        Adoor Gopalakrishnan , reportedly spotted Subodh in the later’s master piece Balgandharva for which he received huge appreciation and awards.