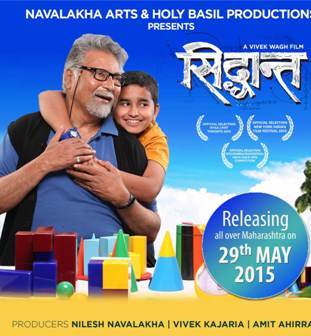 Vivek Wagh’s debut directorial venture, the Marathi movie ‘Siddhant’ is all set to release on the 29th of May this year. Vivek who has previously worked as the executive producer for movies like Checkmate, and Ringa Ringaa which were immensely successful, has done a great jobin Siddhant, even though it is his first movie as a director.

This sensitive movie is co-produced by Amit Ahirrao of Virtue Entertainment. The story of this amazing movie revolves around a grandfather, AppaThosar and his grandson whose relation is established through mathematics.   The movie showcases family principles, faith and love and every scene comes with a message which is conveyed beautifully by the actors. The protagonists played by actors ArchitDevdhar and VikramGokhale have done justice to the characters and their performance is brilliant. The other actors include Swati Chitnis, Ganesh Yadav, MadhaviSoman, SarangSathaye, Neha Mahajan, Chandrakant Kulkarni, Prashant Tapasvi, SurajSatav, Baba Aphale and KanchanJadhav. The music for this movie has been composed by ShailendraBarve and amazing singers like Shankar Mahadevan and Makarand Deshpande have sung the songs of this touching movie.

Even before the music launch, the movie was selected for the Toronto International Film Festival of South America and the New York Film Festival. How the movie will be is evident from the fact that even before it release, it was creating an impact on the global audiences.

Be sure to get the tickets for the Marathi movie Siddhant for yourself and for your family on 29th May.