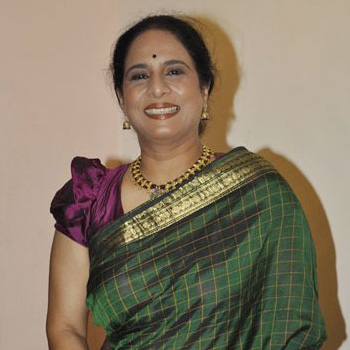 Shubhangi Gokhale is a popular in Hindi and Marathi movie and TV star. She was born on 13th May 1972 in Aurangabad wherein she was brought up at the same place. She did her schooling and college from Aurangabad and has been actively involved in theatres during her student life. She has been active in participating in cultural activities that helped her to gain interest in the world of acting. Hence when she competed her studies, she headed to Mumbai to pursue her dreams of making in M Town. Her popular play included the show called Tarun ahe preet ajuni while she did a number of other shows as well.

Soon she got the chance to act in a Hindi TV show called Do DIl Bandhe Ek Dori Se followed by a number of other both Hindi and Marathi TV shows. These include Pinjra, Lek Laadki Hya Gharchi, Tu Bheshi Navyane, Ganga Ki Dheej, Anubandh, Adhuri Ek Kahani, Kshitit Ek Mrugjal and Akashzep to a name a few. Her journey is acting started in the year 1988 and went on to do films once it came in its way.

She did a couple of movies as well, which started with Delly Belly, Aashiqui 2, Bodyguard, Bharatiya, Dum Asel Tar, Akaash Vani, Kuni Ghar Deta Ka Ghar and Singham Returns to name a few. Her career in acting involved both the films in Hindi and Marathi. Talking about her personal life, she got married to her old time friend called Sanjeev Latkar.