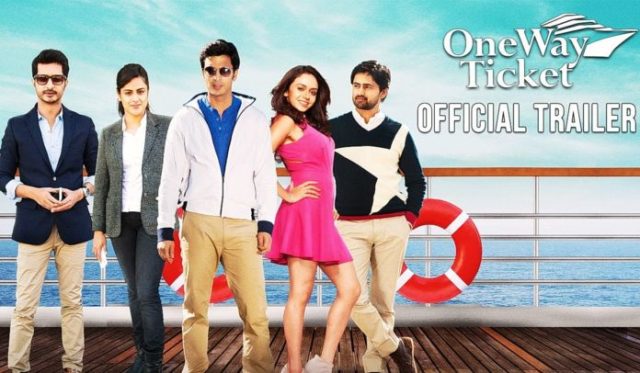 A multi star cast, a cruise trip and spectacles across the continent of Europe and an engaging suspense. That is One Way Ticket. This surely sounds like a formula for a highly engrossing film. How successful the journey turns out! Here is the whole story of my experience on this cruise.

The Story: Aniket, played by Shashank Ketkar, is an imposter who is not able to use his passport and escape to hi home land India. In such a predicament, he founds the passport of Aditya Rane, played by Gashmeer Mahajani. Now Aniket does all that he can do pass as Aditya and travel on the cruise to reach Rome only to take the next flight to India. On the journey he discovers that Aditya’s fiancée is also on board this cruise. To add to this spicy drama is a murder mystery and more. All put together you have a tale of trouble on travel. Since Aniket has a history of treachery, should he be the usual suspect? The mystery unfolds only in the end.

Why watch this movie and Why not to: Ever been on a cruise to Europe? Well, the writer and script perhaps thought that people would love to watch the wonder striking Europe through this film. They have put wonderful scenes from Spain and Italy and Rome to add to the excitement. Well, does that remind you of Bollywood’s Dil Dhadakne Do? Pretty much. The sightseeing is definitely a Plus for One Way Ticket. But the loophole lies in not executing the mystery drama effectively. The script leaves many loose ends and logical errors are galore from the start.

Performances: Two actresses and three actors in a masala movie is apt recipe. Each actor, I must say, has played his part well. Gashmeer (as Aditya Rane) and Shashank ( as Aniket)are boisterous and natural. Sachin Patil ( as Samar Raj) is well placed and fits in comfortably. Actresses Amruta Khanvilkar (Shivani) and Neha Mahajan (Urvashi)  are pretty and impactful in their respectful roles.  Other actors include Asha Shelar, Hrushi Deshpande. Each one puts up decent performance.

Music: Gaurav Dagavkar is pleasing and foot tapping. It is indeed the soul of the film which shifts it spectacle across Europe. Lyrics by Ashwini Shende also matches expectations.

Direction : Kamal Nathani does a good job with the bunch of actors. The execution of the story leaves out loopholes in the script only to add to the logical errors. The film demands the audience not to use their brain much or else you will not believe things like how Aniket passes as Aditya despite there being identification of the passenger with the photograph on the passport. You should also neglect how passengers enter each others’ room despite of not having room cards. Well, let’s just leave it there.

The Final verdict: A onetime watch. An average entertainer. One Way Ticket will keep you entertained with sights and music if you don’t complain about the logical errors.