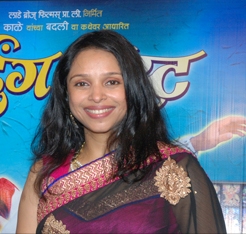 Sharvani Pillai is a popular actress from Marathi TV serial apart from being active in other regional cinemas. She was born on 25th June 1973 and her birth place in Mumbai wherein she was born and brought up at. She did her schooling and college from here only. She is married to Unnikrishnan Pillai. Since her college days, she was active in theaters and soon landed up doing a couple of plays including   Makadachya Haati Champagne, Alibaba ani Chalishitale Chor and Gopala Re Gopala. Soon she landed up doing TV serials playing a girl next door in most of these TV shows. Some of the characters in films like Damini, Awantika, Ambat Goad and Tuza Ni Maza Ghar Shrimantacha to name a few. Besides, she also worked in a Hindi TV serial called Duniya.

She soon headed to do a Marathi movie called Tu Tithe Mee, which helped her to enter the stardom. She played the character of daughter in law wherein she got the main protagonist wherein she was seen playing against the veteran actor from M Toan called Mohan Joshi. She was also seen in the B Town film Atithi Tum Kab Jaoge doing the role along with Paresh Rawal and Ajay Devgan. Some of her regional films include Jogwa, Pangira and Deool. Her recent released was Pinjaraa.