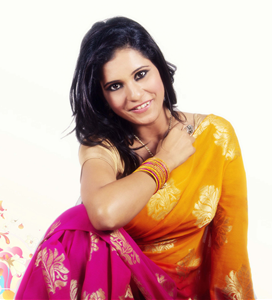 Nandita Dhuri is a popular name in Marathi TV. She was born on 16th March 1982. She hails from Pune wherein she was born and brought up. During her school and college days, she was active in cultural activities. She had bagged a number of prizes in college competition for plays and ekan kikas. After finishing her college, she went to do a RJ job and also played voiceover artist for some time, however, she was soon seen moving towards the acting world completely. Some of her plays include Baya Daar Ughad and Sada Saduchi Bayko Aani Urlela Jag.

Soon she got a movie called Elizabeth Ekadashi wherein she played the character of a mother. She was spotted by the director by one of the plays and soon roped in for the role. As far as her TV serials are concerned, she played the role for Laxmi Malvankar over the channel called Zee Marathi Show Mazhe Pati Saubhagyavati. This was the first TV show, which helped her to get the pivotal role opposite Vaibhav Mangale. The other movies include Tapaal and Kachru. Talking about awards, she won Zee Gaurav Puraskar for her performance in theatres.