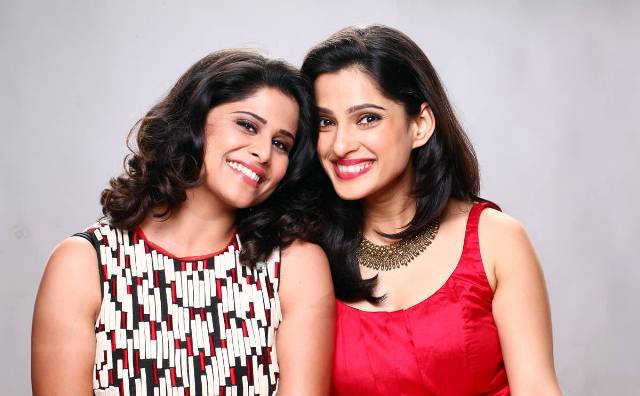 While Priya Bapat is known for her sweet actress image, Sai Tamhankar is known to be bold and sexy as no other actress in Marathi movies is. Director Sachin Kundalkar has cast these two leading ladies of Marathi cinema in his latest film, Wazandaar, which is up for release this year. Recently the actresses posted their pics having gained weight for their roles in Wazandaar.

Wazandaar  looks tempting as the casting of Sai and Priya together is interesting. The two actresses have images way different from each other and the Marathi audience could not imagine them coming together for a film. Well, that seems to be the very reason this has happened. Sai is known for her bikini controversies while Priya is popular for her sweet looks and impactful roles like Uma in Kaksparsh for which she won awards.

She is the first Marathi actress to wear a bikini in a Marathi film! This sparked protests from a few communities in Maharashtra. They opined that it was a contamination in the Marathi cinema which is a reflection of Marathi culture. Her pink bikini pictures , accentuating her chiseled figure, are popular on the internet.

Later Sai posted few bold pics of hers on her website. Looking sizzling in her black bikini lying on a black sofa, Sai made her bold statement once again. But following this there was another controversy. Sai received lewd remarks from an ‘admirer’. Persistent comments led Sai to lodge a police complaint.

Apart from this Sai was also involved in an arrest for partying late in the night.

By now Sai had established herself as a sensuous actress. She appeared in the Hindi sex comedy Hunterr in which she had a steaming hot scene with the lead hero.

In Ravi Jadhav’s educative Balak Palak, Sai played a girl who was courageous and smart and takes part in teaching the kids valuable lesson.

Despite of all this, Sai is not stereotyped in bold avatars. She has played many good girl roles and also family roles. Her recent releases include YZ, Jaundya Na Balasaheb. Her upcoming film is Family Katta which is an out and out family drama.

Priya is known to be very choosy with her films. From the beginning of her career, she has been seen in impactful roles such as Kaksparsh. Her last release was Time Pass2 which was a romantic comedy. Happy Journey with Sachin Kundalkar himself. The actress recently tweeted to announce the commencement of shooting of the film, Gachchi.

Wazandaar is slated to release this year end. We can’t wait to see how the weird combo turns out. But one thing is for sure it will be  Wazandaar performances by both actresses.

Sairat Gets its World TV premiere at Zee Marathi