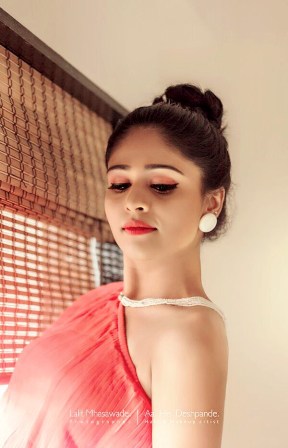 Akshya Deodhar is the leading actress in the soon to release TV serial Tujhyat Jeev Rangla on Zee Marathi. The romantic comedy serial will go on floor from October 3. Akshya Deodhar is paired opposite Hardik Joshi. The story is about a wrestler and his love interest played by Akshya Deodhar.

Akshya hails from Pune. She has completed her graduation from BMCC, Pune. During her studies itself she has been associated with various theatre groups and played roles in Marathi plays. Her Marathi play ‘Item’, in which she acted alongside Amey Wagh is well known.

Besides acting, Akshya has also been a model and appeared in advertisements. Tujhyat Jeev Rangla ‘s trailer is receiving rave response from viewers. It will be replacing a popular show in the same slot.

Tujhyat Jeev Rangla is the story of a wrestler form Maharashtra who dedicates his life to wrestling in which he wants to excel. Akshya’s character is in love with him. The wrestler keeps denying his love for her despite of his deep affection for her.

Akshya Deodhar and Hardeek Joshi are paired in this interesting love story. It is also a family drama that is sure to catch up with the audience. Tujhyat Jeev Rangla will go on air form 3 October.